David has been training in the Martial Arts for over 30 now.

At the age of 13 he started Karate at Bernard Creatons Martial Arts School. This training was to last until he was 16 years old. Eventually branching away from Karate and keen to continue his study of the arts, David began to search for a new style that he felt would suit him.

At the age of eighteen, he met the founder of Teh Ji Han Jeung Dao Kung Fu, Mr Chris Linstead. Impressed by the style and its philosophy’s David decided to adopt this dynamic Chinese based Martial Art as his own.

He was to spend the next 13 years of his life devoting countless hours per week training within the Teh Ji Han Jeung Dao system.

In 2000, he was awarded his senior black sash, a grade given to only three other students within the styles development.

Since then David’s quest to carry on developing the system has lead him to research some of the worlds most effective fighting systems.

One such system is Eskrima the native Martial Arts of the Philippines.

David’s initial training was through Guru Krishna Godhania of the Filipino Institute of Martial Arts. David was awarded the rank of Katalung Guru from Krishna.

David and HAVOC UK Director Simon both went on to represent Doce Pares in the UK under Grand Master Danny Guba, one of the worlds highest authority’s in Eskrima . 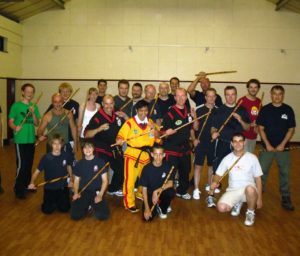 Parallel to this David has researched various Asian and Far Eastern combat arts over this period and has been both impressed and inspired by styles such as Wing Chun, Silat, Tai Chi and Western Boxing.

His research has also taken him in the direction of internal Chinese Martial arts.

This includes the study of Forms, Pushing Hands, Nei Gong, Fa jing and both Buddhist and Taoist Qi Gong.

It is David’s belief that to succeed in the Martial Arts does not take mysterious training rituals, rather hard work and lots of patience.

David’s research into combative arts has taken him to the Far East, including Taiwan and Beijing. Where he has trained under such accomplished masters as Professor Li De yin, China’s top Tai Chi coach. Master Wang Yanji of Sweden and Qi Gong Master Professor Hu Xiao Fei (Beijing) as well as throughout Great Britain to train with various experienced instructors and to represent his system at national seminars. 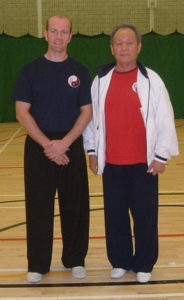 We are honoured to have David on-board as HAVOC UK’s Tai Chi Training Advisor.

Recent posts
Get in touch
Go to Top